The Joy of Africa


I've been here for a week now, and the growing impression I get from Africa is that people are loving. When I first stepped off of the plane, I was excited and very tired, but I really had no idea what to expect. I was picked up by my facilitator Macrae and roommate Brandon; after the long plane ride, their enthusiasm and friendliness seemed far greater than I expected of them. I was surprised by how happy they were. I think that reception, coupled with friendly fellow-flyers in the Johannesberg and East London airports, and kind and curious South Africans sitting next to me on the plane rides there set the tone for my stay here.


I don't mean to exaggerate – my first few days were very difficult. Apart from the utter exhaustion I felt the first day, and by the end of the second, third, and fourth days, during the first two days I really struggled with small offenses. Little comments from the people in my group came across as insults, and my personal cultural mistakes weighed on me like unresolved guilt. This has been my culture shock thus far – it required a lot of personal prayer and rest to overcome it, and to come to peace with my cultural mistakes. Such as they were! I'm sure there are more, and worse, to come – the worst I've done thus far is to mess up the counting in a taxi and get a woman frustrated at me.

That experience too, though, illustrates the love I see in these people. The woman to my left took the collected change from me, counted it out, and supplied some of her own bills in order to make the change work appropriately. After I thanked her for her help, she waited for Brandon and me when we got out in order to warn us to “watch [your] bags – there are a lot of totsis (gangsters) here.” ****

Similarly, on one of the days I was in a dark funk concerning one of the members of our group, one of the taxi conductors recognized me from the day before, and greeted me with, “Hey, my cousin! Long time no see, eh?” and joked around with me. It turned around my whole day. Another example – my hostess invited us to join a family party for her son's fifteenth birthday. There, she stated that the party had two purposes: first, to celebrate her son's birthday, and second to introduce two new additions to the family. I was floored. In the course of the party, and since, she has made it a point to encourage us to become like part of the family.

In the days following my bout with culture shock, things have only gotten better. During that first family party, Brandon and I were invited to a school soccer and dance festival by my hostess' brother, who is a principal. We went there, and Brandon, who is a great break-dancer, performed his routine. The children at the school came up to talk to us, and invited us to perform with them in a little exhibition later – I was roped into it as well, actually. My performance was certainly the least of the group and a little embarrassing, but the kids cheered anyway. The principal treated us like kings, and had food brought in for us, and drinks, and saw to it that we were enjoying ourselves. All for two crazy strangers from America!

Yesterday, we were invited to a coloured family party, called a poikei (“poy-key,” and I'm not sure of the spelling). Here, coloured means of mixed black and white descent – its not a slur at all, but simply the correct appellation for a particular ethnic group.

A poikei is a barbecue/stew party, with a big black cast iron pot with chicken, vegetables, and a type of curry gravy (There's a non-curry variety as well). The whole thing is served on a plate, and then eaten with hands and bread. It's amazingly delicious, and very reminiscent of fufu. (The similarity to fufu was a pleasure in and of itself; I asked and discovered that there IS a South African variety based on corn, and the Aunti (the coloured woman who invited us over) offered to get me a recipe or make it for me sometime while we're here. Aunti gave us a tomato and onion gravy dish with boervoers (classic Afrikaaner sausage) too, just so we could try it out (it's eaten with hands as well). The whole event was very informal and very friendly – the kids in the family were singing and dancing, and when it was revealed that I used to sing, I was asked to stand up and perform. Brandon was asked to breakdance, and the other kids break-danced (broke-dance? Did break-dance?) with him. Laughingly, the children helped us learn Afrikaans, and Rebecca and I taught them phrases from Swedish, which they had fun wrapping their mouths around. Everyone greeted us warmly, joked and laughed with us, danced with us, and generally made us to feel truly like part of the group. All of this relationship built on Macrae's good relationship with the family from last summer, of course, but there were no barriers in our interaction. All of us were woven into the family party, welcomed and loved as if we'd known them all for years.

One note here: coloured people dance! Brandon break dances, and I dance if there's music. After I got out of my shell and got used to the party, we went into the living room and started dancing. Really, we joined the kids (one about ten, one girl about three, and then about fifteen between the ages of fifteen and nineteen) (not all sons and daughters, but all relatives and friends) already dancing. Heather taught one of the sons, (who had been only half-jokingly hitting on her the whole evening) how to waltz, and Heather and I tried to teach everyone how to swing. We were only partially effective as teachers – I don't know if we got the pretzel across this time – but everyone had fun. Not everyone danced right by the speakers- rather, everyone was dancing through the house – but the dancing right by the speakers went on for a long time. That was the same at the school we visited – whenever there was a lull in the soccer (football here) games, or even when there wasn't! - people were dancing to the music.

Maybe that's a better word for the feeling. There's a lot of love here as well, but I stand by the title of this post. It's the joy of Africa – infectious, social, vibrant, alive.

That joy doens't have to be irreverent, either. The members who prayed in Church yesterday prayed beautifully, personally. In the prayers opening and closing meetings even, the speakers poured out their hearts to God. This is hard to explain – the prayers were not inappropriately personal, but were uttered in the spirit of love and worship. It's not just a cultural issue either – I've heard prayers that were more and less sincere from Africans before – but the spirit of the prayers given was inspiring.

****(Perhaps some explanation is necessary – everyone gets into large combis (15-16 passenger vans) that travel regular routes. Sometimes there's a driver and conductor, other times just a driver. Everyone knows the rates for travel around town, so each person gets in and then passes their money forward, saying “one,” or “two” or however many passengers they're paying for. Those in the front, or the conductor, work out the different amounts and make change, and then pass it back, sometimes saying “one at twenty,” or “two at fifty” depending on the number of passengers paid for and the bill provided. I sat in the front on that occasion, so everyone passed their bills up to me. 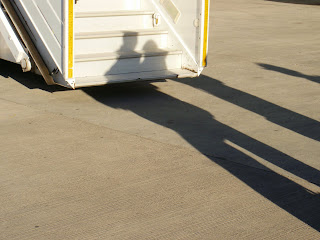 This is my first step in Africa - where my foot first touched African soil. Er, cement. Ground. - It was kind of a rush, actually. 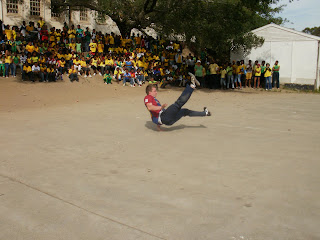 This is my roommate Brandon, a poli-sci researcher and break dancer. Here he is doing windmills. The kids loved it, and a second group broke out windmills and flares too. 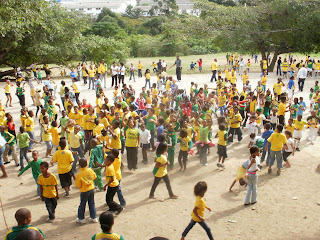 Here are the kids, dancing. More kids later came onto the pitch, and danced. :-) 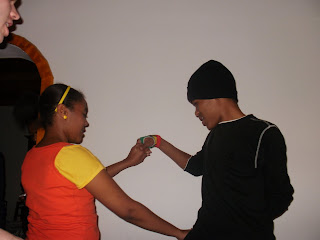 Here are Janie and Rohilo practicing the Swing moves we taught them. They did really well, but got a little tangled in the pretzel. 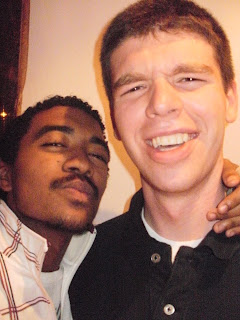 And here is J'lill (Jalill or Jalleel) and I making strange faces for the camera. Jalill was the one hitting on each of the girls in our group during the party.
Posted by Brett at 8:19 AM