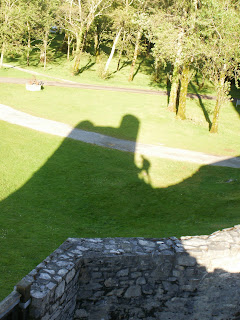 I am currently editing a travel essay written by a friend of mine. As I am also in the process of reading Jon Krakauer's "Into Thin Air," wanderlust has been on my mind. Krakauer, in describing the most lethal summer on Everest to date, was trying to warn away further attempts; I find in his writings both the certainty of danger on that mountain, an inescapable dread, - even more powerfully - a sharpening of the relentless longing for Everest, and the sure knowledge that someday I will make the attempt.
My friend's essay, coupled with Krakauer's account, reminded me of a poem by Robert Service. I've only ever read the first stanza before, which is a romanticized description of a - apparently my - race of people. The rest of the poem speaks the truth, though. Heaven help us all.
The Men Who Don't Fit In* -Robert W. Service
There's a race of men that don't fit in,
A race that can't stay still;
So they break the hearts of kith and kin,
And they roam the world at will.
They range the field and they rove the flood,
And they climb the mountain's crest;
Theirs is the curse of the gypsy blood,
And they don't know how to rest.
If they just went straight they might go far;
They are strong and brave and true;
But they're always tired of the things that are,
And they want the strange and new.
They say: "Could I find my proper groove,
What a deep mark I would make!"
So they chop and change, and each fresh move
Is only a fresh mistake.
And each forgets, as he strips and runs
With a brilliant, fitful pace,
It's the steady, quiet, plodding ones
Who win in the lifelong race.
And each forgets that his youth has fled,
Forgets that his prime is past,
Till he stands one day, with a hope that's dead,
In the glare of the truth at last.
He has failed, he has failed;
he has missed his chance;
He has just done things by half.
Life's been a jolly good joke on him,
And now is the time to laugh.
Ha, ha! He is one of the Legion Lost;
He was never meant to win;
He's a rolling stone, and it's bred in the bone;
He's a man who won't fit in.
Doctrinally, there are some amazing points here too: those who seek to become "a law unto themselves" suffer misery eternally. But my question is this: what if one feels that God calls to the field? To the mountain? Or to travel? What then? Where is happiness for these?

Here I am no longer speaking of the Gospel - I believe travelers can serve the Lord. Maybe not as much or as well as someone who is stationary, but still they can be put to use.
I guess that the answer is to serve the Lord first - wherever He calls one to go, and regardless of the wanderlust one feels.

I wrote mistakenly earlier. Doing whatever the Lord instructs us to do, even calls to the field - IS the only way to find happiness. Again, though - Heaven help those He calls to travel, to struggle, to be hurt and change, to climb a mountain.
Krakauer wrote that he left in Seattle a whole lot of little things - his wife, his children, his job - that together added up to something a whole lot like happiness.
He includes a quote that sums it up nicely: "Then I felt, sinkingly, as if my whole life lay behind me. ... At times I wondered if I had not come a long way only to find out that what I really sought was something I had left behind." - Thomas F. Hornbein, The West Ridge
But I can't stop either. I know it - I can look this fact full in the face, and still - I have to go the way I am called. The "fitful struggle" Robert Service described is the only open to me.
Yes, it is the "quiet plodding ones" who generally win the race of life - those who have the courage to face every same day. But I push onwards in response to a divine call that will not let me rest, and if I freeze to death (metaphorically speaking now) with the banner "Excelsior" in my hand, so be it.
Posted by Brett at 12:59 PM No comments:

What I got from General Conference:


Simply this: I need to try and do that which I feel I ought to be doing.

So, feeling divine reassurance for this very unknown career path:

I am a writer.

I am an educator.

I am a professional student no longer.


And, in accordance with divine instruction, things are already coming together in those regards. For one of my entrepreneurial endeavours, I already have a team together. Meetings for those endeavours on Tuesday, Wednesday, and hopefully Friday. Other important meetings: Thursday and Saturday.

I will also pursue a social life.

I do not know how long I can survive while self-employed, but we shall see.

If you have a belief in God: pray for Pres. Monson to have help and lead the Church. Pray for the Gospel of Jesus Christ to be preached in all the areas of the world. After that, I could also use your prayers at this time.

I stand here looking into the darkness of the unknown, completely uncertain as to what lies ahead, but filled with an eagerness and anticipation that draw me onward.

Whatever happens, God is in it. And if God be for me, who can stand in my way?